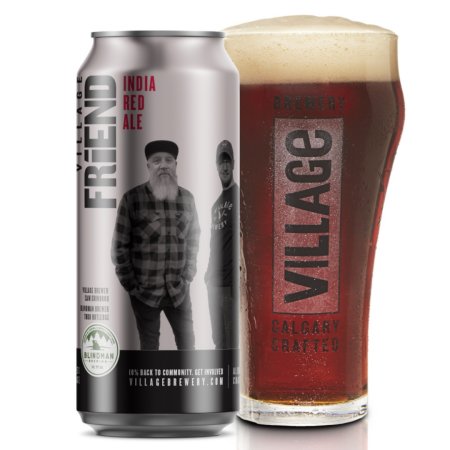 CALGARY, AB – Village Brewery has announced details of the 2021 edition of Village Friend, an annual series of collaborative beers brewed to support the growth of small craft breweries in Alberta.

This year’s version of the beer is an India Red Ale (6.6% abv) co-created with Blindman Brewing:

A strong beer that is hop dominated with a wide array of specialty malts to provide the red glow and a hint of toffee. The malts used, while diverse, are not the talking point of this tasty IRA but they are the grinders working behind the scenes to yield mild roasted flavours. The hops and yeast of this brew, however, win the popularity award for the Village Friend in terms of their flavour impact. The Simcoe and Chinook Hops provide a solid backbone of bitterness, almost reminiscent of a West Coast IPA. The flavour components of the hops are in a danky and resinous realm with a predominantly pine-centric accent.

Village Friend 2021 is available now at the Village Brewery retail store and online shop, and soon at select liquor stores in Alberta.