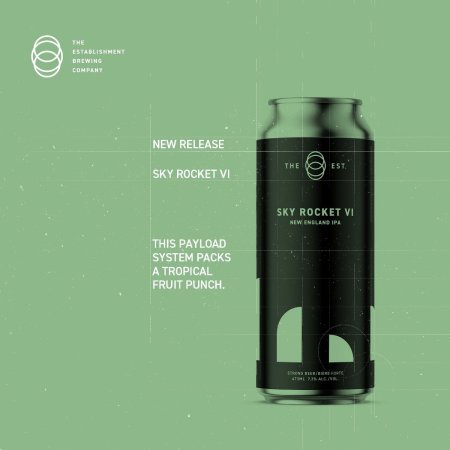 CALGARY, AB – The Establishment Brewing Company has announced the release of the latest in its ongoing series of New England IPAs.

This sixth iteration unseats SRIII as the most potent of our starbound flavour vessels. For this mission, our objective was to explore early fermentation dry hopping, which makes it a bit of a throwback to SRII. This approach allows the free geraniol to biotransform into citronellol – quick-shifting the flavour from floral to fruity. We also changed things up by reverting back to a more unassuming malt base. The light colour and flavour of Pilsner malt lets the hops really sing. After all, hops are the name of the Sky Rocket game – Mosaic and El Dorado to name a couple.

Sky Rocket VI will be released at 3:00 PM today at the Establishment taproom and retail store, and can be pre-ordered online for pick-up.