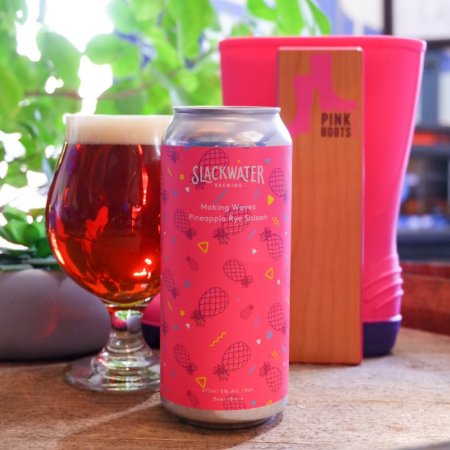 PENTICTON, BC – Slackwater Brewing has announced the release of this year’s beer in support of the Pink Boots Society.

The Pink Boots hop blend this year was a citrus, tropical, herbal and woody mix of hops; I wanted the beer to compliment that. I started with pineapple as many people know I have a love for the fruit and I thought it would be fun to use in the first beer I had my hands on. Rye came in as an earthy way to balance the sweet acidity of the pineapple and using saison yeast we were able to bring it all together with some spice and fruity esters. ‘Making Waves’ as the name feels fitting, as more and more women are breaking into this industry and that’s what we are here to do!

Making Waves is now available at Slackwater and select private beer stores in the Okanagan, and next week at stores in the Lower Mainland and Kamloops regions. Partial proceeds will be donated to the Pink Boots Society.