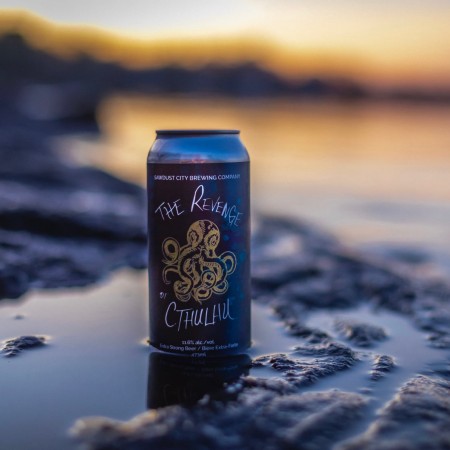 GRAVENHURST, ON – Sawdust City Brewing has announced the release of a new variant on one of its most popular seasonal beers.

The Revenge of Cthulhu (11.6% abv) is a barrel-aged version of The Blood of Cthulhu, and is described as follows:

After nine months of hibernation in his underground wooded cage Cthulhu grows bigger and bolder, as he prepares to unleash more flavour than we’re entirely sure we can handle. The Revenge of Cthulhu is a wickedly massive Imperial Stout aged in Heaven Hill bourbon barrels. With tons of malt, raspberries, cranberries, and tart cherries it bursts with flavours of rich chocolate and chewy, delicious fudge. While the fruit has slowly subsided into the background, vinous notes have developed, while the big bourbon hit of vanilla and oak takes center stage. It pours as black as the blood of a malevolent demigod and throws off aromas of chocolate, vanilla and bourbon.

The Revenge of Cthulhu is available now at the Sawdust City retail shop and online store.