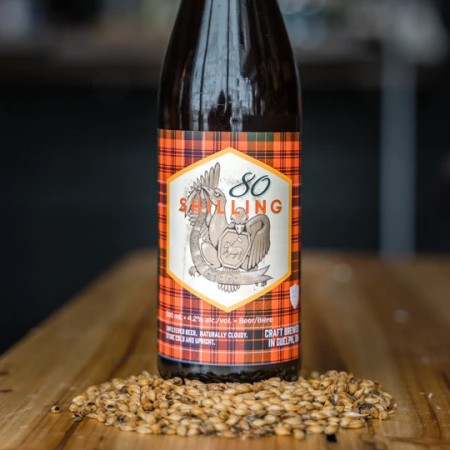 GUELPH, ON – Royal City Brewing has announced the return of an annual Robbie Burns Day collaboration with the Guelph Pipe Band.

Pours a rich brown with deep garnet coming through along the edges of the glass. The head is cappuccino-coloured, voluminous and leaves lacing on the glass. On the nose, aromas of caramel, nuts, brown bread, and a hint of forest floor come up out of the glass. On the palate, biscuity malt notes, caramel and a big nuttiness make it easy to tell this is a Scotch Ale. A slightly herbal, earthy hop character comes out as the beer warms. Carbonation is subdued. The beer finishes quickly but leaves the impression of nut bread on the palate.

80 Shilling is available now at the Royal City retail store and online shop. It’s also available in a special Robbie Burns pairing package with a traditional Scotch Egg prepared by chef Emily Richards, which can be pre-ordered now for pick-up at the brewery next Monday January 25th.