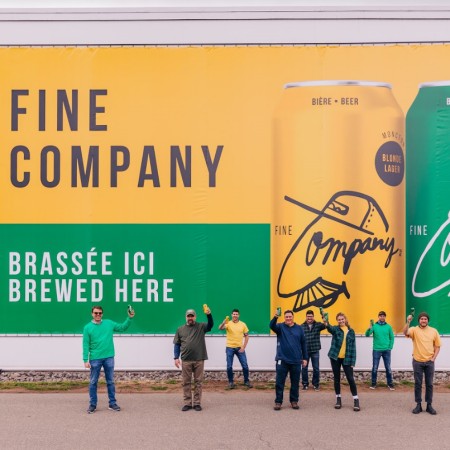 MONCTON, NB – Molson Coors Beverage Company has announced the debut of a series of beers that are being brewed at its Moncton facility exclusively for the Maritime provinces.

Fine Company is described as “a new line of region-exclusive craft-inspired brews paying tribute to the friendly, quirky, fun-loving people of the Maritimes.”

The brand has been launched with two inaugural beers – Blonde Lager (4.8% abv) and Session IPA (5.1% abv) that are described as follows:

Fine Company Blonde Lager has a malty flavor that’s countered by a slight peppery kick from Saaz hops. Its moderately sweet, malty aroma has slight hints of caramel and bread. It has a light-textured mouthfeel and a long, pleasing finish with the undertone of grain.

Fine Company Session IPA has a rich pale-amber haze appearance with aromas of tropical fruits like mango, pineapple and orange. At 45 IBU, it brings flavors of fruity hops balanced against sweet caramel malt, a slightly dry mouthfeel with a hint of acidity and moderate bitterness.

The press release also notes that the brewing team “had a vision to personify the beers as an ode to the people of the Maritimes”, with the Blonde Lager named Henry, who is “approachable, smooth, casual and most definitely welcome at any party”; and the Session IPA dubbed Margaret, who is “bright, refreshing, complex but of course not too serious.”