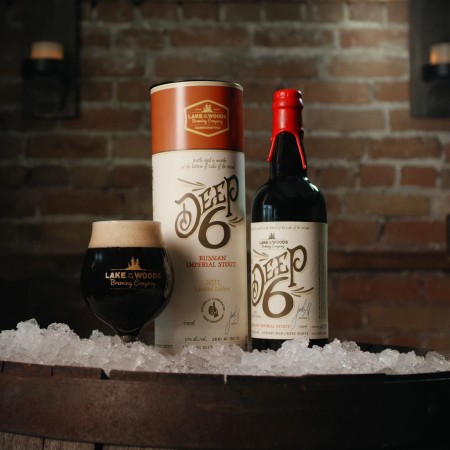 WINNIPEG, MB – Lake of the Woods Brewing has announced the launch of an annual series of ales that will be undergoing a unique cold aging process before being released.

The Deep 6 project will see a new beer each year sunk into the brewery’s namesake lake each autumn, and aged for six months under 20 feet of ice in water with an average temperature of 3-to-4 degrees Celsius.

The first beer in the series is Russian Imperial Stout (10% abv), which was “deep sixed” on November 1st, and is described as follows:

Born in darkness, bred in the North – Lake of the Woods Brewing Company’s Russian Imperial Stout is riddled with rich and complex notes of dark chocolate, coffee, raisins, toffee and a hint of cherries. At 10% ABV, it’s the perfect beer to be cold aged under ice. From LOWBrewCo with Love – best served with a thick accent. Za zda-ró-vye.

Deep 6 Russian Imperial Stout will be released Spring 2021 in a limited edition of 1000 x 750 ml bottles, which can be pre-ordered now via the brewery online store. For more details, see the Deep 6 website.