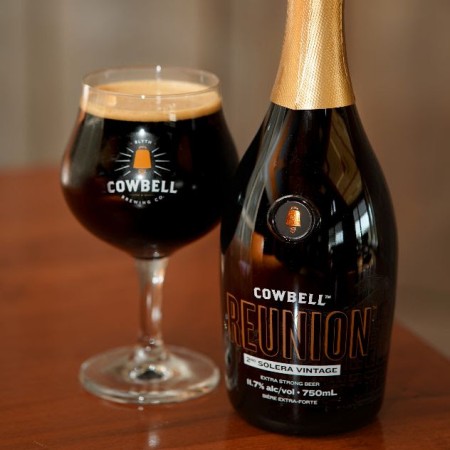 BLYTH, ON – Cowbell Brewing has announced the 2nd annual vintage of a beer crafted from the brewery’s Almanac Anniversary Series beers using the solera blending process.

Each year, Reunion will be a blend of 50% of the current Almanac Anniversary Series beer, and 50% of all the prior Almanac Anniversary Series beers. As every Almanac will be a different style and flavour, Reunion will evolve each year with flavour, depth, and interesting and nuanced maturity. Reunion 2nd Solera Vintage is 50% 2020 Belgian Quad, 25% 2019 Imperial Stout and 25% 2018 Barleywine.

As Almanac 2020 Belgian Quad makes up 50% of the 2020 Reunion, it provides the most influence on the resulting flavours. Almanac 2020 Belgian Quad was brewed with three specialty malts, Huell Melon hops, Belgian Strong Ale yeast, cane sugar and Belgian Candi Syrup D90 and D180. It adds complex notes of port, dark fruits such as fig, raisin and cherry, as well as caramel and an enticing touch of cinnamon.

In addition to the regular edition, Cowbell will also be releasing Niagara Red Wine Cask-Aged Reunion 2nd Solera Vintage, a limited variant which has been aged for 7 months in a Niagara red wine cask, resulting in “notes of dark cherry, raisin, plum, black licorice and fruitcake.”

Both editions of Reunion for 2020 will be released on Friday November 27th at the Cowbell retail store and online shop.