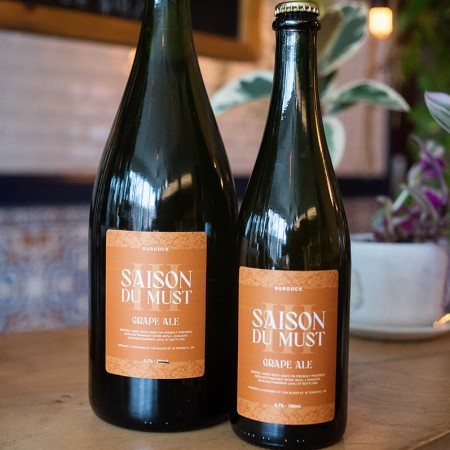 TORONTO, ON – More than two-and-a-half years after the last installment, Burdock Brewery has announced the release of the newest in a series of barrel-aged grape ales.

Saison du Must III (9.7% abv) is described as follows:

Saison du Must III started as a clean ale that was aged on fresh pressed Gewurztraminer skins for 3 weeks in stainless steel then barrel aged in neutral oak for 6 months. It was then bottled with the Gewurztraminer (40%) from the original skins and has been bottle conditioning since April of this year. Gewurztraminer is one of our favourites because it’s pungency is so potently powerful. Teaming with terpenes and other aromatic compounds, it’s a grape that is known for being a serious nostril stimulator. SDM III does not disappoint on the aromatic front. Expect a barrage of apricots, lychee and other sweet fruits.

Saison du Must III is available now in 750 ml bottles and 1500 ml magnums at the Burdock retail shop and online store.