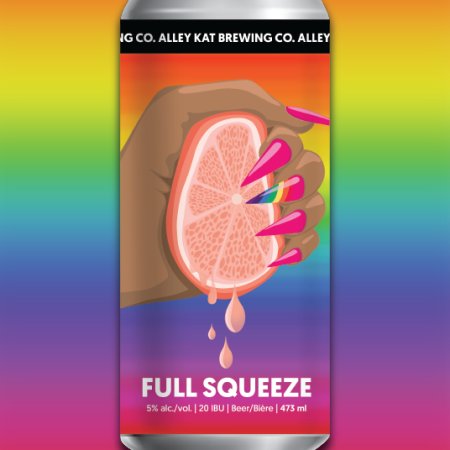 EDMONTON, AB – Alley Kat Brewing has announced the return of a limited edition beer in support of Alberta’s LGBTQ2+ community.

Full Squeeze (5% abv) is blend of the brewery’s Full Moon Pale Ale and Main Squeeze Grapefruit Ale, and is described as “a perfect marriage of west coast hops and grapefruit flavour.”

Full Squeeze will be launched tomorrow (May 20th) and will be available at the Alley Kat retail store and online shop, select liquor stores, restaurants and bars (COVID-19 restrictions permitting) in Alberta while supplies last. Partial proceeds will go to the Imperial Sovereign Court of the Wild Rose, Alberta’s longest running organization for the LGBTQ2S+ community.