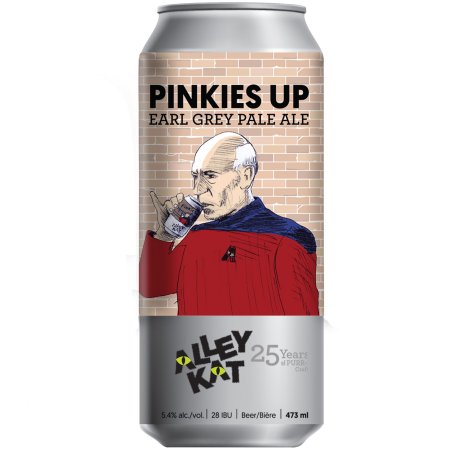 EDMONTON, AB – Alley Kat Brewery has announced details of the next release in the Back Alley Brews series of limited edition one-off beers.

We’ve fancied up this pale ale with Earl Grey tea from Acquired Taste Tea Company to add flavours of bergamot and black tea to the light malt backbone. We’ve also hopped it with Amarillo and Citra to add a citrusy twist. So dig through the closet for your most dapper outfit, pull on your white satin gloves, and top your head with your biggest, most floral hat because it’s time for tea… sort of.

The artwork for Pinkies Up was created by local artist Borys Tarasenko.

Pinkies Up will be released tomorrow (November 12th), and will be available in 473 ml cans at the brewery, select retail stores, restaurants, and bars in Alberta while supplies last.