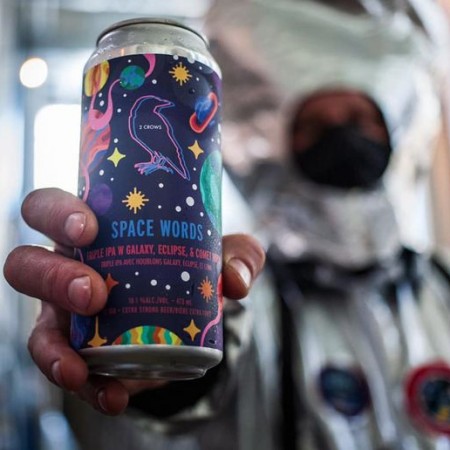 HALIFAX, NS – 2 Crows Brewing has announced the release of its “very first triple IPA, and it’s a wild one.”

Brewed with a base of German Pilsner malt, flaked wheat, and Golden Promise, with sucrose added to the boil to boost the abv. Hopped judiciously in hopback with Galaxy and Comet. We fermented Space Words with a blend of juice-forward hazy yeasts, as well as a unique nectar specialist yeast Metschnikowia reukaufii. This yeast was initially harvested from flowers in the Berkeley Hills of California, and is thought to have evolved to make flowers smell better for pollinators by altering nectar compounds like glycosides. Super aggressively quadruple dry hopped with Galaxy, Eclipse, and a small amount of Comet (I’m not gonna lie, that was mostly for the name).

Space Words is available now at the 2 Crows retail shop and online store.